Dear Parents / Students,
Govt. Degree College boasts of its glorious traditions, its students are serving the motherland in a high and influential position and bringing in the good name with their unmatched abilities and a lot of bonanza in the form of foreign exchange from overseas We are doing our best to carry on the continuity of these golden traditions. Our aim is to follow the merit policy, saying no to any compromise on merit and the quality of education. We are proud to declare that we have the best teaching faculty of the district who are imparting education and training to the youth with their best abilities, bringing forth their best in academic, mental, and moral aspects of their personality. We have the honor to say that we are producing the best academic results. Our students are winning merit into medical and engineering colleges of the country while winning high positions in MA/MSc exams of the University. We have launched a BS four-year program in eight disciplines. You are welcome to Govt. Degree College with full faith and confidence that it will groom your person to shine like a star on the horizon of intellect, wisdom, and prosperity. Long live Govt. Degree College 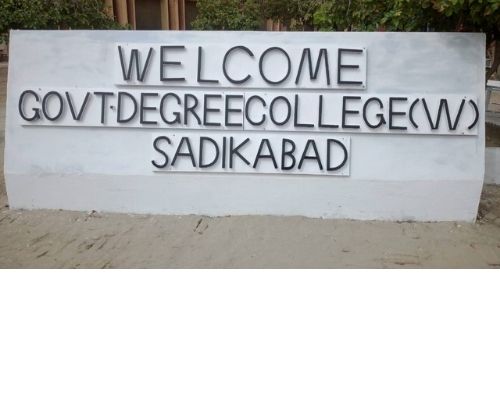 There was not a single College for girls in Sadiq Abad. The girls had to get admission to Rahim Yar Khan or Bahawalpur after Matric. In 1976 this College was established as an Inter College. As there was no College building was provided so a portion which consisted of three class-rooms, Principal Office, staff room, Clerical Office, Library and a store-room was borrowed from Govt. High School Sadiq Abad. But due to the increasing strength of the students, there was dire need of independent new structure was required.

Open chat
Asslam o Alikum!
You are going to contact with focal Person from Govt.Associate College For Women Sadiqabad ?